Where are the Dead? (A Guided Tour of Hell)

Jesus *said to her, "Stop clinging to Me, for I have not yet ascended to the Father; but go to My brethren and say to them, 'I ascend to My Father and your Father, and My God and your God.' " John 20:17

Jesus said this after He had been in the tomb for 3 days. So . . . where do the dead go?  I thought the dead went to heaven!  Well, they do but…. Let’s work our way through some of what the Bible actually says concerning the realm of the dead.  Most have drawn their conclusions based on tradition and various sources rather than scripture leaving vast gaps in their understanding.

Let’s look in on one of Jesus’ conversations.

Now the Pharisees, who were lovers of money, were listening to all these things and were scoffing at Him. Luke 16:14

So, Jesus was being ridiculed by a group of Pharisees and they got more than they bargained for…
Jesus gave them a guided tour of hell.  Want to tag along?  I’ll reproduce the text in it’s entirety then we’ll digest it below.
The rich man and Lazarus
Luke 16
19.  "Now there was a rich man, and he habitually dressed in purple and fine linen, joyously living in splendor every day. 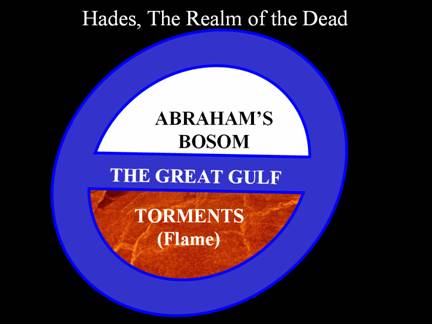 20.  "And a poor man named Lazarus was laid at his gate, covered with sores,
21.  and longing to be fed with the {crumbs} which were falling from the rich man's table; besides, even the dogs were coming and licking his sores.
22.  "Now the poor man died and was carried away by the angels to Abraham's bosom; and the rich man also died and was buried.
23.  "In Hades he lifted up his eyes, being in torment, and *saw Abraham far away and Lazarus in his bosom.
24.  "And he cried out and said, 'Father Abraham, have mercy on me, and send Lazarus so that he may dip the tip of his finger in water and cool off my tongue, for I am in agony in this flame.'

Email ThisBlogThis!Share to TwitterShare to FacebookShare to Pinterest
Labels: Death

You can determine the "Real Islam" for yourself!


“ The Prophet (Allah bless him and give him peace) said, “Lying is wrong, except in three things: the lie of a man to his wife to make her content with him; a lie in war, for war is deception; or a lie to settle trouble between people”” [Ahmad, 6.459. H]


I have completed another study on Islam which I will share with this mailing.  It is like another page off the evening news.  Note that this is not a blind forward, I have prepared this information myself.  As we have noted in previous emails there has been an ongoing argument in the press about whether the “real Islam” is peaceful… Or whether the “real Islam” is the terrorizing and murdering Islam of Al-Qaeda  or Hezbollah .  (The links take you to Wikipedia articles on each organization)

My recommendation is to go back to the Islamic texts and run a word search .  Then we can see for ourselves what the koran, or the hadith teaches. (Here's an online Koran w/ a search engine.) Today's Research is on "Terror." 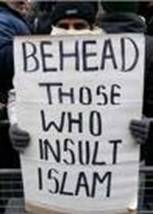 I will have very little to add.  Below is every instance of the word “terror” in the Koran.  This approach does not limit us to what the local news may want us to know.  It is neither Republican or Democrat, nor is it  a Christian trying to criticize Islam.  What we get to witness is Muhammad speaking for himself on Terror within Islam.  We cannot go back to the 6th century, but we can read his words from the 6th century.

Please watch this Fox news video and see if what you see, matches up with the text you read below. And here is a muslim explaining why “terror” is legitimate to further Islam.  You can compare what he says, to what the text below requires of Muslims.  i.e. What Muhammad himself required of Muslims.

You can click on the chapter headings and see any of these verses in context.


The Koran records Muhammad's
Statements on the Use of Terror...