One Christian’s thoughts on Chik-fil-a, Sodom & Gomorrah, and The Culture War Currently Underway in the USA.

Over the last month we have seen in dramatic terms how intolerant evil is of good.  One man spoke of his faith in the Bible as the Word of God, and the traditional God given definition of marriage.  There were immediate calls for boycotts etc. against the entire company because of one man’s faith in God.
Here is his initial statement, the "Chick fil a Anti Gay Statement": 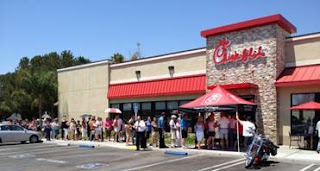 “I think we are inviting God’s judgment on our nation when we shake our fist at Him and say ‘we know better than you as to what constitutes a marriage’ and I pray God’s mercy on our generation that has such a prideful, arrogant attitude to think that we have the audacity to define what marriage is about.”


Have you noticed how “intolerant” and vicious the “tolerance” movement is?  Have you noticed the vicious attacks that Christians regularly endure simply because they are Christians?  The fact is that the war between light and darkness has been going on since the Garden of Eden.

We have been an incredibly “blessed” nation as we have purposely submitted ourselves as a people to the God of heaven.  “In God we trust” has actually been the underpinnings of our society.

So… how does a “blessed” people become a “cursed” people?  Clearly if we embrace same sex marriage as we have already embraced infanticide we are one step further down the path to Sodom.

Sometimes we overlook the obvious.  This process of “blessed” to “cursed” has occurred many times in the history of the world. Israel was a “blessed” nation that became “cursed” multiple times.

Sodom was a “blessed” community as well. Consider Lot’s assessment…

Genesis 13: 10.  “Lot lifted up his eyes and saw all the valley of the Jordan, that it was well watered everywhere--{this was} before the LORD destroyed Sodom and Gomorrah--like the garden of the LORD, like the land of Egypt as you go to Zoar.”


How did they become so “cursed” that God literally destroyed them off the face of the earth?  The common answer is perversion.  That is absolutely true, but like many issues there is more to it.

What does it take to become “cursed”?
How did we reach the point that one man can confess his faith and left wing hate groups immediately start trying to destroy him?  The answer is the same.  God has answered this question directly. Our society despises the answer…
Ezekiel 16

46.  "Now your older sister is Samaria, who lives north of you with her daughters; and your younger sister, who lives south of you, is Sodom with her daughters.
47.  "Yet you have not merely walked in their ways or done according to their abominations; but, as if that were too little, you acted more corruptly in all your conduct than they.
48.  "As I live," declares the Lord GOD, "Sodom, your sister and her daughters have not done as you and your daughters have done.
49.  "Behold, this was the guilt of your sister Sodom: she and her daughters had arrogance, abundant food and careless ease, but she did not help the poor and needy.
50.  "Thus they were haughty and committed abominations before Me. Therefore I removed them when I saw {it.}
51.  "Furthermore, Samaria did not commit half of your sins, for you have multiplied your abominations more than they. Thus you have made your sisters appear righteous by all your abominations which you have committed.


Note that God lays out 4 definable explanations for the curse of Sodom… each of which clearly apply to us as a nation right now.

Let me note each of the 4.
1) Arrogance   Perhaps the best way to illustrate the first “Arrogance” is to provide you a link to the man who is now our president ridiculing the fact that many of us are led by scripture… God.

Do you want to hear him as he arrogantly chides the faith of most of us?  He ridicules what is actually in Leviticus, Deuteronomy and the Sermon on the Mount.  He concluded by saying, . “Folks haven’t been reading your Bible!” Click HERE to see the video.

Christians are required by God to answer questions put to them by worldly people.
I Peter 3: 15.  but sanctify Christ as Lord in your hearts, always {being} ready to make a defense to everyone who asks you to give an account for the hope that is in you, yet with gentleness and reverence;

So yes, if the first lady wants to question us about our moral stance relevant to her agenda, she deserves a response.

2)  Abundance of food.  This is one of those things that is an upside down blessing that is often a curse.  Today we feed everyone.  There is no reason for anyone in our country to starve… ever!  Why is it a curse?  Abundance takes away motivation, leads to innovation through boredom. If you are too busy feeding your family, it is hard to find time to cheat on your wife.  But when you are fed whether you are a responsible citizen or not… you get bored with a moral lifestyle.

I recall a lady that once called me asking for assistance.  She went on and on about how life was so unfair to her.  She concluded the conversation by, “And I am just sick and tired of eating bologna.”  At which point I burst out laughing. I know that I shouldn’t have, but it just hit me un- prepared!   I responded by saying, “Lady, I was going to invite you over to our home for lunch… but we are having bologna!”  In our abundance, a significant portion of our population from our leaders on down have fallen pray to an attitude or destruction.  This attitude is directly described in the Bible’s most graphic description of how the entire world cursed it itself!


21.  Because that, when they knew God, they glorified him not as God, neither were thankful; but became vain in their imaginations, and their foolish heart was darkened.
22.  Professing themselves to be wise, they became fools,
23.  And changed the glory of the uncorruptible God into an image made like to corruptible man, and to birds, and fourfooted beasts, and creeping things.
24.  Wherefore God also gave them up to uncleanness through the lusts of their own hearts, to dishonour their own bodies between themselves:


3) Careless ease.  Note that each one of these things are interrelated. We have abundant food so our government subsidizes sin. Single mothers no longer need to worry about the consequences of sin.  The government will put them up in government housing, feed them, care for them and indirectly pay them to sin.

Yes, I know that many are single parents through circumstances beyond their control. . . But when you go into a government project what do you really find there?  Single parent families, with children from multiple fathers.  It used to be that if a girl got pregnant… the man would marry her.  Today it too often results in her getting a long term pension as a reward for her behavior.

What of the fathers?  Never in the history of the world have we seen such a large scale abandonment of children by their fathers.  But, often it isn’t the fathers… the mother doesn’t really need or want them. She can go on to the next man on a whim.  Her provider is now the government.

Do you suppose that Lyndon Johnson envisioned the chaos to the family that he would create when he began this system in the 60’s?  How has it worked for us?  For the first time in the history of our country the majority of the young men that do enter into marriage were not raised by their fathers. They have not witnessed what they are supposed to become.

I don’t know that I realized how “blessed” my upbringing was… my father loved my mother till the day she died (and still does). He worked long hours and taught me to do the same. What does a welfare mother, (or father) teach their children?


We have now moved on from arrogance to boredom.  Because of said boredom our society has begun to redefine the family.  In this argument over same sex marriage be sure we don’t leave out the overall abandonment of marriage as God defined it long ago! Our social policies have been redefining what constitutes a family and who should provide for it… for a long long time.

Did you hear the rest of Mr. Cathy’s statement? 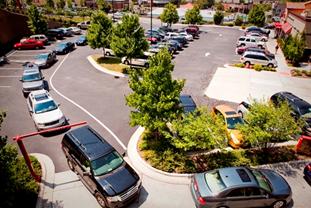 I went to Chik-fil-a on the now infamous Wednesday and waited in the long lines.  (this photo is one of many identical scenes across the nation as people came in support) There I saw the last hope of our country. The godly core who are often ignored in the media that go about living a godly life. It was eye-opening.  I have been to amusement parks and other public events with long “hot” lines.

Instead of demeaning Christianity and Bible ethics our leaders should be embracing it.

4) Not helping the poor… consider that in our country we pay people to be poor.  Let me throw something inflammatory out.   Do you have a right to eat?  The resounding answer of our worldly people is “yes.”  The Bible answer is “not necessarily!”

10.  For even when we were with you, we used to give you this order: if anyone is not willing to work, then he is not to eat, either.
11.  For we hear that some among you are leading an undisciplined life, doing no work at all, but acting like busybodies.
12.  Now such persons we command and exhort in the Lord Jesus Christ to work in quiet fashion and eat their own bread.
13.  But as for you, brethren, do not grow weary of doing good.
14.  If anyone does not obey our instruction in this letter, take special note of that person and do not associate with him, so that he will be put to shame.


How would you like to go to both presidential conventions this summer and just read this passage?  If our government would implement this blatant command from God…they wouldn’t have such a hard time balancing their budget. Instead of taking taxes people could be paying them.  There is an exponential side to this discussion.

We pay people to be immoral, and ultimately lazy then we are surprised when their attitudes undermine everything that once made us great. The people that still work aren’t as motivated because the government takes the fruits of their labor from them by force and gives it to undeserving people. That is discouraging to the best of people.

How did Sodom go from being “blessed” to being “cursed”? The Bible answer is by doing exactly what we are doing!