“The aged women likewise, that they be in behavior as becometh holiness, not false accusers: not given to much wine, teachers of good things: That they may teach the young women to be sober, to love their husbands, to love their children, To be discreet, chaste, keepers at home, good, obedient to their own husbands, that the word of God be not blasphemed." (Titus 2:3-5) 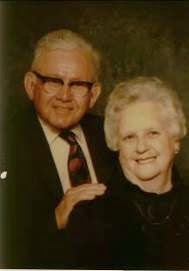 In this passage, Paul identified the role of Grandma as a key stabilizing factor for a successful home.
This is the last line of defense as mapped out by Paul… Grandma! Today this is compounded by the fact that now, in many cases, Grandma hasn’t known marital success or a “settled life” either. I was born in 1955 and graduated in 1973. I was the product of a happy home, as were both my parents.

The hoary head (gray head) is a crown of glory, if it be found in the way of righteousness.  Proverbs 16:31

Previous to my generation, divorce was unheard of. When I married, my Grandma started in lecturing me, “In our family, we marry for life!” She was right… She died with the man she had loved all her life. My mother, her daughter, died with the man… (my father) whom she had loved all her life. My father loved my mother till the day she died. With my generation, that presumption has collapsed. There are fewer and fewer of us left.

Note from the following chart that I was not alone. This situation of crumbling marriages and fragmented families has been in a state of decline though out my lifetime. 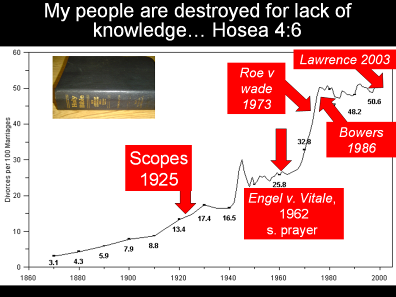 Most within this generation have not seen a Bible example of how they are supposed to live. For example, most young men coming of age today… literally have not been raised by their fathers! They have been raised by someone else. How can a young man learn how to be a father when he has not seen one… or at least a genuine one?

The chart above shows the rise in the rate of divorce over the last 150 years or so, along with several key Supreme Court cases that have undermined respect for God and the Bible. Notice that as respect for scripture from every level of society has declined, one result has been that success in marriage has all but collapsed.

The rise in the divorce rate, aka “rate of failure” in marriage steadily arose along with the rise in the teaching of evolution. In 1925 the teaching of evolution vs creation hit the courts and became a key part of required teaching. A child no longer was the offspring of God, but became recognized as an animal. School discipline began to disintegrate… The “animals” acted as such… slowly at first… loyalty, fidelity etc… “human” traits slowly began receding. 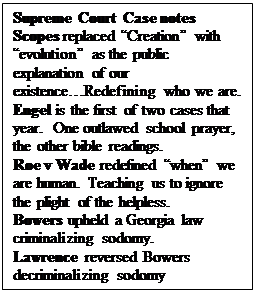 School prayer was outlawed… So young “animals” were no longer allowed to address their creator. Next, it became legal to destroy children in the name of civil rights. If our children are but “evolved cattle” then, it logically follows that parents should have the right to choose death for their children… as they choose death for their cattle or their pets. We put animals to sleep when it is “kinder” than letting them live. Said children were declared to legally be “non-persons” in much the same fashion as slaves had once been. Note the visible, measurable effect these decisions have had on the viability of marriage and stability!

That which makes us human (different) has bit by bit been undermined and then repudiated. For this article, we could track the decline of marriage, the rise of violence, the collapsing economy, the rise of welfare… each of these things is interrelated. It is a package deal. Respect for God, respect for our country, respect for ourselves…

Civilization has slowly begun to unravel. Why? … These events did not occur in a vacuum.

“The fear of the LORD is the beginning of knowledge: but fools despise wisdom and instruction. “ Proverbs 1:7.

My generation began experimenting with the fundamental foundations of society itself.

This is an experiment that has failed!

I joined the rank of “Grandparent” some 10 years ago. I grew up through the rebellion of the sixties. I have watched the explosion of drugs, divorce, and finally of violence. My own sister was murdered over a divorce. During my lifetime, as a nation, we have “sown the wind, and have reaped the whirlwind!” (Hosea 8:7)

My point is this: My grandparents are all gone. I am now old enough that my friends are beginning to gradually die off. The newest ranks of grandparents are no longer the last bastion of stability and happiness! In earlier years, when a marriage fell apart, Grandma was there. But today, too often Grandma is divorced, single and struggling as well. Today, most (yes most) grandmas have very little to offer. They have lost the moral high ground to give the lecture that my grandma gave to me. 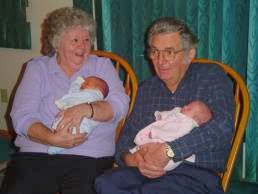 Soon… no one alive will remember what once “was”… As no one now alive remembers a time when families were an unshakeable bedrock of our society. A bedrock that was so stable that only one ended in divorce for every thirty four marriages. It was shameful to fail at marriage. It was shameful for a man to walk out on his family, or for a woman to throw out her husband and expect the government to “raise” her kids.

What is “normal?” Chaos has taken the place of stability… and soon living memory will fade. We will not remember what “could be”… If we choose God’s way.

Be not deceived; God is not mocked: for whatsoever a man soweth, that shall he also reap. Galatians 6:7


How long has it been since we kicked God out of school, then from public discourse?

A local newspaper article appeared a few years ago that said our area (Wichita, KS) has one of the highest divorce rates in the nation, 7 divorces for 10 marriages. I guess that is fair, we are also a national center for late term abortions.

We have gone from 1 divorce in 34 marriages… to a point where basically half of all marriages fail everywhere. But in our area it is nearing 3 out of 4!

One modern definition of insanity is doing the same thing over and over while expecting a different result.

God through Hosea had warned us of exactly this situation.

“My people are destroyed for lack of knowledge: because thou hast rejected knowledge, I will also reject thee, that thou shalt be no priest to me: seeing thou hast forgotten the law of thy God, I will also forget thy children.” Hosea 4:6


Time is running out for us as a people! Never in recent memory has the frailty of human reasoning been more obvious. Never has the need for Jesus Christ (and His leadership!) been more clearly demonstrated.


My grandmas have both been dead for many years… If our society is to survive, the older women of this day must gather their grandchildren and demand that they undo what our generation has done!

It is enjoyable to brag about our successes, but now we must admit our failures. We are about to hand off a world that is not as good as the one our parents and grandparents handed off to us… For the sake of our children and grandchildren we must tell them why! So they will know to “want” what they do not see!