“But I say unto you, That every idle word that men shall speak , they shall give account thereof in the day of judgment.”  Matthew 12:36

Have you noticed that “most” of the email forwards turn out to not be true? Is “most” too strong a word?   I have become concerned over the last few years that many of the friends that I call “brother” will lose their salvation over the lies they carelessly forward on the internet.

Otherwise godly, conscientious people seem to feel no responsibility in passing on very damaging things about “this or that.”  For example how many Christians who don’t like our president will pass on every smear that comes their way… “hoping” it is true?

Consider this… A liar makes you into a liar when you blindly hit the forward button.

Then someone considers you trustworthy and thinks that you wouldn’t lie… So they hit their forward button and you  have made them a liar. This time it is because they trusted you!  Then someone trusts them and so on.

Have you seen the email that swears President Obama abolished the day of prayer and instituted a Muslim service instead? Let’s use this email as an example since it is so commonly forwarded...

Most of the things in that email (now a series of emails) are either twisted or an outright lie.

Here are three fact checking links of the type you should utilize before having anything to do with an email like this one:

Did you know that President Obama actually went to federal court to protect his right as president to declare a day of prayer?  He actually did the opposite of what the email says… so why do Christians forward such things?

He chose to observe it privately rather than have a public service, like the one President Bush had.

Here is part of his actual proclamation… “I call upon Americans to pray in thanksgiving for our freedoms and blessings and to ask for God’s continued guidance, grace, and protection for this land that we love” Obama, May 7, 2009: 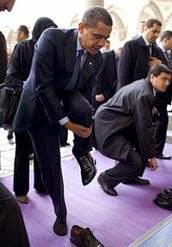 This photo supposedly shows Him participating in an Islamic prayer event hosted by the White House.  Actually the photo is from a state visit to Turkey…  They went to the Blue mosque in Istanbul where all visitors must remove their shoes.  Often times the photos are real but the captions are outright lies.  This is the purest/vilest form of gossip known to man.

Now I do not want to be misunderstood… I have watched YouTube videos of what went on there. It was bad. But it wasn’t President Obama!  He didn’t do it!

How does a Christian justify passing on such a lie?

For the record…
President Obama has done enough that is offensive to Christianity…
No one needs to make things up!
The truth has been bad enough! Oppose him with the truth!

“With all the deception of wickedness for those who perish, because  they did not receive the love of the truth so as to be saved.  For this reason God will send upon them a deluding influence so that they will believe what is false,  in order that they all may be judged who did not believe the truth, but took pleasure in wickedness.”  II Thessalonians 2:10-12

A Christian must love the truth… Gossip and internet smears must not be a part of the Christian’s way of life. When we pass on anything… we must be sure of its validity.  Once we have said it (or forwarded it)… we have taken on responsibility of it.

Jesus said… “You shall know the truth and the truth shall make you free.”  John 8:32  Today the “Christian” element of our country is becoming known for passing on lies!

Note this process has taken various directions since the beginning of time.
Do you recall the Holy Spirit’s explanation for “how” people bought into the idolatry and the various vices that destroyed the ancient world? Well they….   “changed the truth of God into a lie…”  (Romans 1:25)

I would imagine there will be a lot of finger pointing and blaming the other guy at the judgment for the various lies circulating on the internet through the forward buttons controlled by well-meaning Christians.  Adam and Eve already tried shifting the blame… it didn’t work!

Note the ancient mandate among God’s people is consistent with the New Testament one:

“He who goes about as a slanderer reveals secrets, therefore do not associate with a gossip.” Proverbs 20:19

How can blindly passing on twisted emails without either checking them or correcting them NOT be engaging in blatant gossip?

Where can you check facts? There are several options…  Snopes.com   Another good one is Factcheck.org . There are others… choose a couple.

Have you seen the emails stating  that Snopes is owned by various democratic backers and is liberal? Actually one of its owners (Barbara Mikkelson) is a Canadian citizen  and cannot vote. The other (David Mikkelson) registered as a Republican in 2000 but changed that status to  independent in 2009… Snopes has always been supported by advertising … totally. Here’s a link to factchecker debunking the rumors about the debunkers…Or you can read Snopes’ own rebuttal about the lies told about them.

If you open your Bibles and compare I Corinthians to II Corinthians you’ll quickly see that some of the Corinthians didn’t appreciate what Paul said to straighten them out in I Corinthians. Their reaction was to start an undercurrent to discredit him in a very similar fashion!

Yes sometimes they also get it wrong.  But shouldn’t you at least do something rather than pass on a lie?  What if someone trusts you?

Humor is Humor… Many of the spoofs going around on the internet are genuinely funny, but a Christian spreading lies is not funny!  There is a difference.

“But now ye also put off all these; anger, wrath, malice, blasphemy, filthy communication out of your mouth. Lie not one to another , seeing that ye have put off the old man with his deeds.”   Colossians  3:8-9


Hi I am glad you stopped by our blog. These articles are from an emailing that we did several years ago.   Today most of our work is on facebook